The number of individuals with eating disorders who report engaging in excessive amounts of exercise to compensate for eating, is increasing. Over-exercise or obsessive exercise is not unlike purging or taking dangerous substances such as laxatives: it is a compensatory behaviour that can have devestating physical and emotional consequences.

It is widely believed that excessive exercise is just as damaging on the body and mind of an individual suffering from an eating disorder as purging after a meal.

Eating disorders and disordered eating are significant problems for many athletes. Female athletes are especially at risk in sports which emphasize a thin body or appearance, such as gymnastics, ballet, figure skating, swimming, and distance running. Male athletes are especially at risk in body building and wrestling. A greater risk is associated with sports in which anaerobic activities predominate over aerobic activities.

Gender and eating disorders among athletes

Causes of eating disorders among athletes

Effects of eating disorders in athletes

Eating disorders may result in symptoms which interfere with athletic performance. Fatigue, Weakness, Lightheadedness, Broken bones, Leg cramps, Irregular heart rate: These are someof the many symptoms which may impair athletic capacity. These symptoms are the result of various physiological complications of eating disorders, including low thyroid hormones, poor heart and circulatory function, osteoporosis, and electrolyte imbalance.

Some tips for coping with a person with an Eating Disorder 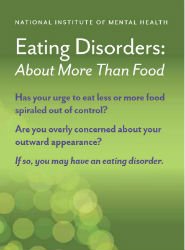