Bulimia exists when a person eats large amounts of food in a way that feels out of control then compensates by vomiting, starving, exercising or using laxatives. The person may not change in size or shape.

Bulimia is characterised by:

What is a large amount of food?

This will differ for different people. However, a large amount of food is usually much more than what an individual would usually eat in a similar situation. Most binges tend to include sweet high-calorie food or food that the person considers to be ‘bad’. It is also common for the person to eat the food very quickly during the binge. The binge will continue past the stage at which the person feels full and will often end up in pain from being so full.

What triggers a binge?

A binge may result from feeling low or depressed; an external stressor (eg, an argument with a friend); intense hunger after restricting eating; or feeling bad about their body weight or shape. The binge may be planned in advance or may be a spur of the moment thing.

Most people with bulimia are very ashamed of their eating behaviours and will become very secretive, trying to hide food, hide the evidence of a binge or hide the fact they are vomiting or using some other compensatory behaviour eg. the person may vomit into bags in their bedroom instead of going to the bathroom.

In order to prevent weight gain after a binge (as well as to relieve some of the feeling of being so full) most people will try to rid their bodies of the food they have just eaten. The most common behaviour is vomiting. Other methods include the misuse of laxatives, diuretics and occasionally enemas; fasting or restricting food intake for a day or several days or exercising excessively.

Dissatisfaction with body shape and weight

Who suffers from Bulimia?

Onset is typically late teens or early twenties. It is more common in females, however it is found in males more often than it is suspected.

People with bulimia are often trying to preserve a slender figure. Unlike people with anorexia, they usually do not become extremely underweight. The desire to be thin drives them to vomit or use vast quantities of laxatives to hurry food through their system. Outwardly, people with bulimia may appear confident and self-assured, but they are secretly coping with all the stress and inner turmoil through food. Bulimia can occur after a period of anorexia or it may develop independently.

How Bulimia affects the family

Frequent disappearance of food may lead to suspicion; it is irritating to find a well stocked cupboard empty overnight and many household budgets are wrecked by bulimic behaviour. Members of the family may be puzzled because the person does not gain weight despite eating a great deal and sufferers are likely to be touchy about the subject. As the condition progresses, vomiting becomes easier and eventually it may become difficult not to vomit. Some people who aren’t able to make it to the bathroom may vomit in plastic bags, pot plants or outside which can be disturbing if another family member finds it.

While most people with bulimia are of ‘normal’ weight or do not become severally underweight the physical effects of bingeing and purging (especially vomiting and abusing laxatives) can be very serious and the person’s physical safety will need to be monitored closely. Most people who suffer from bulimia feel ashamed and guilty about what they are doing and want it the stop. Treatment often includes learning new coping skills and working through the underlying issues (in individual or group therapy) as well as learning how to listen to their bodies in regards to feeling hunger and full. Practical tools may be looking at the person’s daily routine and establishing when are the high risks times for bingeing or purging – these may be when the person is lonely or bored or after a particular stressful event. Looking at how to reduce these triggers is an important first step to overcoming this disorder.

Signs and Symptoms of Bulimia

Side effects of bingeing

Side effects of vomiting 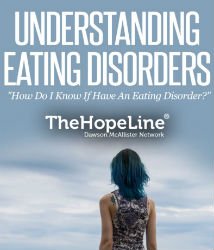